Long Live the Land of the Free

Long Live the Land of the Free

In this song book by Solomon Smulewitz, Long Live the Land of the Free, was a song to represent the loyalty of which Jewish immigrants had towards the United States. This song was popular for recent arriving Jewish immigrants in the United States during the turn of the twentieth century. This song opened with "To express loyalty with every/fibre of one's being, to/this Land of Freedom, is the/sacred duty of every Jew." This is how many Jews felt during this time. After coming to the United States many Jew felt love and loyalty towards America and want to show their appreciation, this song was how they were able to. This is not the only song written by this composer. There were many others, all of which represented a different figure in United States history. This one had the Statue of Liberty on the cover. The loyalty that these songs portray are similar to the kind of love and respect that Jake had for the United States. Once he arrived here he changed as a man. He wanted to be everything that America represented and he was more loyal to this country than he was towards his own family. 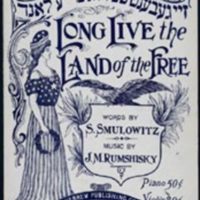